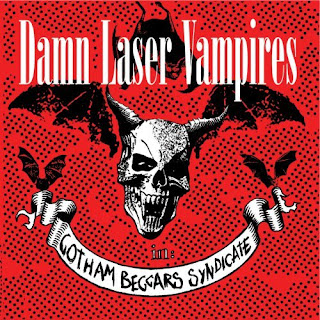 "If Quentin Tarantino were to make a film based on a Bram Stroker novel, Damn Laser Vampires US debut Gotham Beggars Syndicate would be the soundtrack. Damn Laser Vampires is a post-punk trio that brings elements such as polka, psychobilly, and new wave into a strange ground filled with high energy performances, menacing vocals, and an otherworldly ability to mystify and entertain. Traditional punk receives a dose of Transylvanian attitude as Damn Laser Vampires yell, scream, and howl through songs of God, The Devil, sex, drugs, alcohol, and self-doubt"