The Mystick Krewe of Clearlight 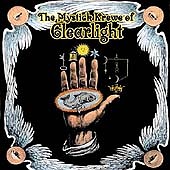 The Mystick Krewe of Clearlight was founded in 1996 as an instrumental side-project by members of New Orleans bands, Eyehategod, Down, and Crowbar. This project has allowed the members to explore music outside their native metal genre. After several years of shows in New Orleans with the occasional out-of-town show they recorded their self-titled debut album on Tee Pee Records in 2000.

Like the city they're from, The Mystick Krewe Of Clearlight elevate having fun to an art form. A festival atmosphere runs throughout the six tracks. The instrumental sludge and doom jams have odd twists of '70s rock a la Deep Purple, glorious hard rock, and surf music in each song. All the songs are upbeat and evoke happy spirits. One can easily imagine The Mystick Krewe Of Clearlight playing to a smoky, crowded bar with jovial folks smiling as they enjoy the music over beer, cigarettes, and good conversation.

The only comparisons I can make for The Mystick Krewe Of Clearlight are the Bakerton Group or Sixty Watt Shaman with a Hammond organ. However, if you like stoner rock, "heavy" rock, or jam rock then The Mystick Krewe Of Clearlight will light your fuse. Even fans of Southern rock legends that jam like the Allman Brothers or Lynyrd Skynyrd would find something to like with this Krewe.

Production was conducted by The Mystick Krewe Of Clearlight and Dan Fortman.

The Mystick Krewe Of Clearlight is Jimmy Bower on guitar, Joey LaCaze on drums, Andy Shepard on bass, Paul Webb on guitar, and Ross Karpalman on organ. - taken from roughedge.com, Reviewed by Christopher J. Kelter