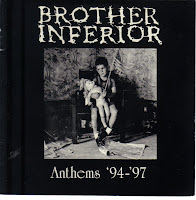 Brother Inferior started out in the summer of 94 with Ryan, Chad, Alex, Mike and 2nd guitarist named Dan Riffe. They recorded "Bound & Gagged" seven inch after only two monthes or so of practice and Dan left the band shortly after. They all pretty much hate that record but others like it, so oh well. They did a big U.S. tour in the summer '95, did the "Blasphemy & Treason" 7" in early '96, did a short west coast tour in summer '96, then came the split 7" with NOTA and the LP in early 97 and a massive 3-month tour of the U.S. and Canada that summer. They were very, very active in those years, constantly playing local and writing new songs. However, Alex quit the band right after that tour so they remained very inactive for a long period. They finally got Grant Lohrey on bass, but then Mikey quit the band, but not before recording the "Six More Reasons" 7" That wasn't released until early '99, by then they were playing a lot again with Jason Garvey from Rash of Beatings on Drums. During that inactive period Ryan kept busy playing with Burned UP, Bleed Dry, from Fort Smith Arkansas and touring with them in summer '98. Burned Up, Bleed Dry did a really good 7" on slap a ham records, but then broke up last summer. Brother Inferior did another U.S. Tour this past July and AUgust and then leaving straight for Europe for september, October, and Novemeber. It was massively long, strenuous tour, playing in over 20 countries. BI played close to 100 shows in 1999. They also released a 7" on Trujaca Fala records in Poland called "Dismantiling the Capitalist Machine -Euro-Tour '99." Brother Inferior is now taking a long break. Ryan went on to play in the band "protest stagnation" and currently plays in the Portland based band "exit collapse." Chad fronts the bands "Larkin" and "Bring Down the Hammer". (myspace)

Really good Anarcho Punk from Tulsa, Oklahoma. This disc compiles all of the bands output and was released by Sensual Underground Ministries also from Tulsa. Check them out here and get to state smashing.