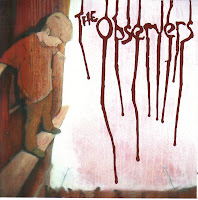 Lead singer and primary songwriter Douglas Burns along with longtime friend and SPEDS bandmate Colin Grigson formed THE OBSERVERS. The intention of the band was to create a new voice in music that was true to the traditional punk sound of the 70's and 80's, while remaining contemporary and relevant. The band formed in 2002, but did not play their first show until March 2003 after settling on their first line-up, which included Muslim on guitar and Skeeter Joplin on drums. Together, this line-up recorded the "Down On Today" demo and the group's first vinyl release, "Lead Pill" (Super Secret). Later that year Muslim, and Skeeter left the group to pursue other interests. Hajji Husayn then introduced his cousin, Ian (Johnny) Kashani to THE OBSERVERS who then joined with Brett Ramone on drums. Shortly after that, they hit the road. Ramone and the group parted ways in 2003 and Mike of THE MINDS became the drummer. With extensive touring in the United States, Canada, and Europe in 2004 and 2005, the line-up of Kashani, Burns, Grigson, and Mike became the most recognizable line-up of THE OBSERVERS. In their time together, this line-up recorded the critically acclaimed records "So What's Left Now" (Vinyl Warning), "Walk Alone" (Jonny Cat), "Where I Stay" (Deranged), and the song "What A Let Down" featured on the MRR Public Safety Compilation. While in THE OBSERVERS, Kashani, Grigson, and Mike continued to play in other bands such as THE MINDS, CLOROX GIRLS, THE RAIDS, BLOODBATH AND BEYOND, RIOT COP, and THE MANHOLES. Eventually, they left THE OBSERVERS in 2005 to pursue these other interests. Grigson, Mike, and Kashani went on to form DEFECT DEFECT, but Kashani left the group soon thereafter. Muslim and Brett Ramone also formed a band together called THE INNOCENTS. Kashani formed CLIT RIPPER and played with Grigson in SELF ABUSE. Burns and Hajji formed the RED DONS who have been described by some as the continuation of THE OBSERVERS. The members of RED DONS also perform in an acoustic act called THE REVISIONS that plays THE OBSERVERS, THE SPEDS, and other original songs. (myspace)

Picked this disc up from the band back in 2004 when I saw them play with Gorilla Angreb at Gilman St. This was released by Vinyl Warning and is #8 in the label's roster. The Observers sound bring to mind classic sounding punk rock, here is a fan page to check out the tunes to see if you need this. Quality punk rock from the Pacific Northwest, check it out!