Andre Williams and the New Orleans Hellhounds - 2008 - Can You Deal With It?

At age 72, Chicago’s “Mr. Rhythm” is showing no signs of slowing down. Popping up on the American soul scene in the mid-1950s, Andre Williams scored a number of small-time hits such as “Bacon Fat” and “Jail Bait” for Detroit’s Fortune Records. Through the 1960s and ‘70s he supplemented his career as a Chess Records recording artist by writing and producing material for Stevie Wonder, Ike and Tina, and Parliament/Funkadelic.
The 1980s and early ‘90s were a different story, however. Crack addiction led to dire poverty and at one point Williams was begging for change on the streets of Chicago. Fortunately, since 1996 it’s been mostly upwards and onwards for the Alabama-born singer. In 1998, he released the comeback album, Silky, revisiting many of his early hits from the ‘50s. In 1999, he released a fairly well received country album called “Red Dirt” with Toronto indie rockers the Sadies. Since then he’s been steadily releasing albums every couple of years, touring Europe several times and collaborating with a host of young bands such as the Netherlands’ Green Hornet (Holland Shuffle!) and Detroit’s Two-Star Tabernacle (Ramblin’ Man).
The collaborations continue with this month’s release of Can You Deal With It? via Bloodshot Records (Neko Case, Ryan Adams). This time around, Mr. Rhythm teams up with the “alcoholic miscreants” of the Morning 40 Federation. Known here as the New Orleans Hellhounds, this rollicking ten-piece really is more beast than band. Over 33 minutes and nine cuts, Can You Deal With It? is a sleaze rock mud bath. Stylistically, you get the works. Whether it’s hot-rodded R&B, a woozy hangover ballad, or just some good old-fashioned front porch country, this album’s got just about everything you can cram under the garage rock umbrella.
The opening title track is a wildly triumphant gesture, especially when you take into account the fact that Williams’ career could easily have ended 20 years ago. Emerging from a noxious haze of overdriven organ fumes (courtesy of the mysterious Mr. Quintron), “Can You Deal With It?” snaps together with a tight bass riff coupled to some hellacious lead guitar. Next up is the infectious “Hear Ya Dance”. Probably the sexiest song about phone sex you’re ever likely to hear, it’s also the album’s finest overall track. Williams’ lascivious spoken word snakes around a smoky groove to hair-raising effect, while a hushed Mick Jagger-esque falsetto refrain adds icing to the cake.
Other standouts include the galloping “Pray For You Daughter”, featuring wailing horns, harmonica and an exuberant call-and-response vocal. “Rosalie” is an enormously fun hillbilly ballad (in spite of several completely indecipherable lyrics), while “If It Wasn’t For You” is a surprisingly sincere and openhearted plea to a lover for forgiveness. From top to bottom, Can You Deal With It? is a record that overflows with gritty, gutter-mouthed soul. Williams and the kids from NOLA are a perfect fit, serving up track after track of garage rock brilliance. Under usual circumstances, cross-generational collaboration seems risky at best, but this album shows that if it’s carried off with the right balance of reverence and reckless abandon the results can be extremely rewarding. 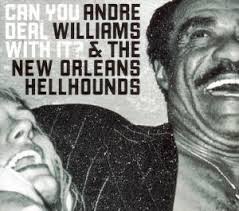 
If you enjoyed the Morning 40 stuff, check this out.