Kermit Ruffins (born December 19, 1964) is a jazz trumpeter, singer and composer from New Orleans, Louisiana, United States. He has been heavily influenced by Louis Armstrong, Louis Jordan and Eddy Jefferson. Ruffins accompanies a large portion of his songs with his own vocals, and he says that the highest note he can hit on trumpet is a fortissimo C note. Most of his bands perform New Orleans jazz standards, though he also composes many of his own pieces. Jon Pareles of the New York Times wrote of Ruffins in a July 16, 2001 article, stating that "Mr. Ruffins is an unabashed entertainer who plays trumpet with a bright, silvery tone, sings with off-the-cuff charm and never gets too abstruse in his material". 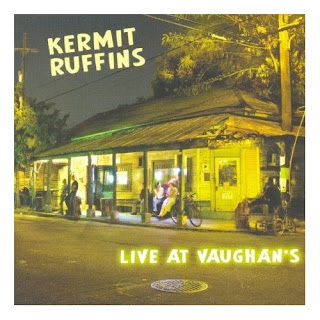 Kermit Ruffins is the closest the 21st century is likely to get to a personification of the spirit of traditional New Orleans jazz. Possessed of a bright, shining trumpet tone and warm, relaxed vocal style, Ruffins recalls Louis Armstrong in personality and presentation, but moreover he represents the friendly good-times vibe of the Big Easy. Ruffins's live recordings are the best way to sample his downhome fare, and LIVE AT VAUGHAN'S, on which Ruffins treats standards ("World on a String"), his love of his hometown ("Do You Know What It Means To Miss New Orleans?"), and feel-good pastimes ("Hide the Reefer"), is a pleasure back to front.Down Beat (p.70) - 3.5 stars out of 5 -- "Ruffins has reigned over Thursday nights at Vaughan's for more than 15 years, and this recording delivers the most honest experience of his show to date."
Global Rhythm (Publication) (p.57) - "Kermit is absolutely ebullient....This vibrant recording shows that the music is still kicking, and Kermit's having a good time doing his part."

If you like Jazz or just good time music in general, then you should definitely enjoy this.

Posted by swampchode at 5:38 PM