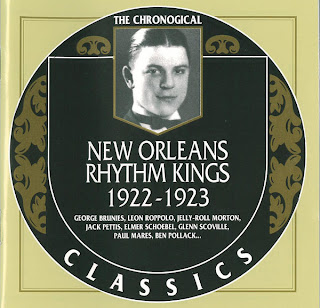 This is some of the best early jazz that you'll ever hear. The overall traditional jazz landscape would be incomplete without these hot little records. Descending upon the Gennett recording studios in August of 1922, the New Orleans Rhythm Kings called themselves the Friars Society Orchestra in honor of Mike Fritzel's Friar's Inn, a Chicago speakeasy that gave them lots of gig work. "Husk O'Hare" was designated as their director. It's worth noting that a gathering of hares is traditionally known as a "husk." If that's not the origin of his name, it is a staggering coincidence. A husk o' hares, get it? Anyway, these rusty old stomps and shimmies are a joy to behold. "Farewell Blues" is as good as it gets. This number and "Tin Roof Blues" really put the Rhythm Kings on the map. "Discontented Blues" turned out to be a nice vehicle for Jack Pettis, who generates one of the very first tenor sax solos to make it onto phonograph records. The saxophone really adds a whole dimension to this ensemble. "Panama" is pretty darned scratchy at the outset; they probably should have found a different copy of the original platter. Up until this track these old Gennett sides sounded pretty good. "Tiger Rag" and "Livery Stable Blues" are similarly disrupted by more surface noise than was heard on vinyl LP issues of this same material. (How puzzling!) With "Oriental," we return to decent remastering, which is not really so much to ask. Just when you think the trouble has passed, "That's A-Plenty" sounds a bit scrofulous. Fortunately, the sound quality improves after this, so the listener is no longer distracted by excessive scratchiness. "Shim-Me-Sha-Wabble" comes across beautifully, Mel Stitzel's piano quite audible through the horns. As any collector of old records can tell you, when there's a lot of surface noise, the piano is among the first instruments to get lost in the scuffle. Artie Matthews' "Weary Blues" rocks nicely, setting an example for later generations to emulate. "Da Da Strain" is a marvel of studied polyphony, a jacked-up conversation between staunch cornet, reefer-head clarinet, and dog trombone. Irresistible! Drop everything and dance around the room to this. Jelly Roll Morton wrote "Wolverine Blues" after spotting what he considered an unusual zoological word on a barbershop in the wilds of Michigan. The Rhythm Kings' version of this song is delightfully solid and relaxed, kicking lightly and wagging its tail. "Maple Leaf Rag" sends perky trills right on up through the scratchy record surface. Jelly Roll Morton actually sat in with this band on July 17 and 18, 1923, breaking the color bar and sounding marvelous behind the horns. "Mr. Jelly Lord" wins awards for "best slow drag," while "London Blues" and "Milenberg Joys" are fundamentally essential recordings that need to be studied carefully and lovingly, for this is one of the taproots of jazz, this bundle of old-fashioned/newfangled dance tunes on scratchy old records. Even if a few of the tracks could have been cleaned up more diligently, it's probably good to hear authentic 78-rpm surface noise so nobody forgets what it sounded like. -  taken from the All Music guide

Posted by swampchode at 4:49 PM