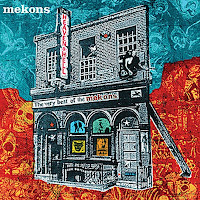 The Mekons are a hard working band that has been around for 30+ years and has released 17 full lengths so their body of work is rather large and if you are new to them, it's probably easier to start with this double cd compilation. This collection spans their whole career in non-chronological order and includes tons of classics. I've been a longtime fan of the Mekons and I've heard all their albums and some are just incredible but even I find it easier to just throw this in even though it's obviously missing some of my favorites. They alternate between John Langford (mostly) and Sally Timms on vocals, and I gotta say I'm a huge Timms fan, when she comes in, believe me, the world shines a bit brighter. So, check out this great band for yourself because I'm not going to even try to describe their music.