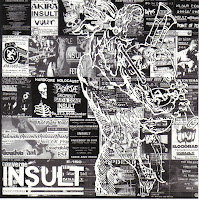 Genre - Powerviolence
Origin - Horst, Limburg Netherlands
Time - 59:49 min.
File - 117.29 MB (320kbps)
Insult is a Dutch band that plays fastcore / powerviolence in a style related to Charles Bronson, Infest only with a much crustier attitude, mixing elements of old school Hardcore and Death Metal into he blend. Their last show was played in 2001.Members of Insult are also found in bands like Bile(nl), Supository(nl), HSML (Hot Steamy Monkey Love)(nl), Grizley Adams.

Their lyrics contain a heavy “fuck you all” attitude, as they despise any scene forming and above all, they hate emo’s. A split was released with Mallorn and later a cd with all of their songs (37 tracks) was released including some live performance. The disk was aptly called “Emo-bashing Fastcore Pimps” it was released in 2002.

Brutal fastcore unit inspired by the likes of DROPDEAD, INFEST, NEGATIVE APROACH and SIEGE unleashing a full-scale campaign for Emo-destruction throughtout shows in Europe and the UK.

Formed as an fast old school HC/Punk-band in “92 and splitting up after their transformation into violent Fastcore in late “95, the band reformed in “97 to attack the trendy-ass HC/Grind-scene at the time and slaying all Emo-weeners in the process. (lastFM)

Dutch rippers stick'n it to EMO! This was released on Six Weeks Records and is #79 in their catalog of releases. You can visit their page by going here. Good stuff here!