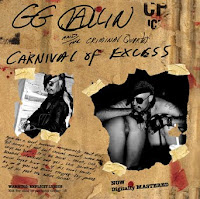 Genre: Country/Punk
Recorded: July 28, 1991
Label: Rockside Media
File: 71 MB/320kbps
*
"This release, which contains previously unreleased mixes of the songs from the original album (with one exception, "Outskirts Of Life", which used the mix from the original 1996 release), was issued in limited editions of 100 white vinyl albums and 1200 compact discs. Added to the original release is a mock-commercial for the album featuring Tiny Tim and excerpts from a phone conversation with Allin about the album. Unlike many other GG Allin recordings, this release featured songs in the vein of country music, many of them acoustics." (Wikepedia)
*
Personnel:
GG Allin - vocals, backing vocals,
Bob Widenhofer - guitars
Andy Irvine - bass
Paul Reller - drums, piano, accordion
Shireen Kadaver (credited as "The Razor") - backing vocals on "Carmelita", "A Snake" and "Pick Me Up".
*
Track Listing:
1. Outskirts of Life 3:20
2. Fuck Authority 3:25
3. Carmelita (Warren Zevon) 2:59
4. Guns, Bitches, Brawls and Bottles 3:16
5. Son of Evil 3:06
6. Watch Me Kill (The Boston Girl) 1:47
7. The snakeman 2:39
8. GG and Tiny Tim on COE 2:49
9. No Rights 3:58
10. Pick me Up On Your way Down ( Axton/Levy/Reeves, adapted by GG Allin) 1:59
11. Borrowed Time 4:11
12. GG's Vision 1:25
*
I'll let GG sum it up:
Always gonna fight, until the day I die
No laws or limits will stop me from the way I live my life
Don't get in my way, unless you want to die
I'm living fast and hard and I accelerate on high
I listen to no one, use who I got to use
Don't ever try and get too close, 'cause I'm a burning fuse
Everyone around me is someone I will play
I'm living out my life and I'm living day to day
Within the perimeters of this world I just don't feel real right
I'm living by the laws of a gun and a knife
My soul cannot be tamed, I'm living just to die
I'm living by myself on the outskirts of life
*
GG Allin
Posted by Lord Kur at 3:16 PM