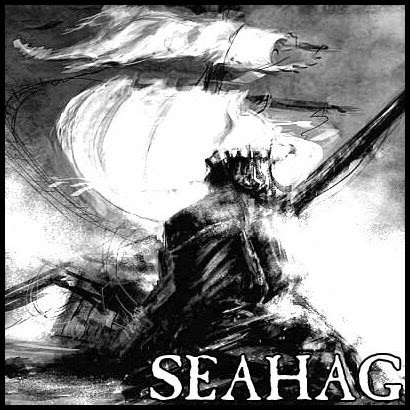 These guys were formerly known as Locust Swarm and started playing as Seahag in 2004. They play out of Little Rock, Arkansas as a 5-piece and feature Deadbird's vocalist as well as 2 other members involved with Circle of the Black Thorn.

This is some pretty dark and melodic sludge with doomy vocals that alternate from guttural low-pitched screams on up to the high-pitched sludge variety. This is unlike anything I've heard in a while on grounds of their melodic nature, but it is refreshing to hear their take on the usual dime-a-dozen sludge style, and the feel you get from it is definitely despair and hopelessness.

I guess you get elements of Rwake, considering the melodic riffs, but this is in no way psychedelic; it most resembles vocals and melodies. Their demo as Locust Swarm remains incomplete and, unfortunately, never saw a release. However, the demo released under their Seahag moniker is killer along with their full-length, so go ahead and check those two out in their entirety. Most songs won't go past the 6-8 minute mark for those of you on the inpatient side.


YEAYOURITE!!
Posted by Teabag Stallone at 11:31 AM