Damnweevil- It's Always Darkest Before It Goes Pitch Black (2009)

This is the 2nd release of some truly infectious doom sludge from Oakland, California - check it out.

It's Always Darkest Before It Goes Pitch Black
Posted by GoatOrgy at 5:32 PM 1 comments

The Unnaturals are an excellent band from New Orleans that bring something different to the table.  SURF music!  They are probably one of the busiest bands in the city too, having played shows with all the locals (Suplecs, Die Rotzz, The Bills, The Pallbearers, Crotch Breaker, etc.) as well as many national touring acts such as  The Goddamn Gallows, Daikaiju, Muhammadali, etc. Jenn also plays bass in the local all female rock band Terranova, and is also the front woman for local punk band The Split()Lips.

Check them out HERE 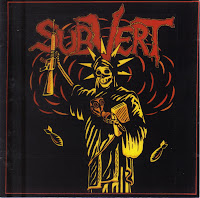 Sorry for not posting as of late, I've been busy with work and all, but I found a little time to post this! Here you have Subvert, a band from the Pacific Northwest that played a style of fast metal tinged hardcore similar to The Accused or "the mighty" Poison Idea but more politically charged, Amebix comes to mind! Subvert was in existence from 1986 - 1991, this slab complies almost all of the bands output, minus a split Lp with Antischism, titled "Thinning The Herd" from 1991. The singer, Eric Greenwalt went on to form Christdriver that put out an Lp on Profane Existence and now plays in a band called Black Noise Cannon. Check this out and chatter back!
Free Your Mind!!!
Posted by Mr.T at 8:58 PM 0 comments

I was a busy busy dude, especially during the last six months, job/career change, moving, and blah blah blah.  Well, 2011 is finally here, I know I haven't posted anything in a while, but thankfully everyone else has been posting up some great albums.  We've received a lot of reader submitted albums that I finally took the time to go through and check out.  So in the next few days I'll be posting them up along with some local New Orleans live videos that I've been filming at shows all year.  I just wanted to say thanks to all the readers and  to my fellow team members here for keeping this blog going.  I know I've said it a few times, but damn. Working 7 days a week sucks.I'll be sure to start devoting more time to this place.  I'm planning on giving this place a face-lift too, so if anyone wants to maybe make some banners or other cool stuff like that, send 'em in.  Also, for anyone who doesn't know, I've been doing an online radio show for Core of Destruction every Sunday night at 9 p.m. Central time called "Yeayourite Radio".  I play all types of stuff, mostly sludge/doom, a lot of New Orleans stuff, as well as Outlaw Country, Black  Metal, and whatever else I've been listening to at the time.  Be sure to check Core of Destruction out, and get in the chat room.  They've got 2-3 shows every weeknight, as well as music streaming 24/7.   Anyways, keep checking back, as I said, I'll be giving this place a face lift, so if anyone has any ideas or wants to help, email me  (swampchode@gmail.com).  Submissions will be up in a few days, as well as some videos and stuff.  Thanks again to the Krewe and all of our readers!
Posted by swampchode at 11:23 AM 4 comments