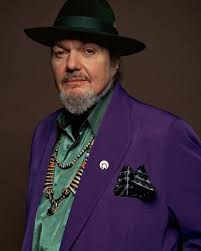 Dr. John gained fame as a solo artist, beginning in the late 1960s, with music that combined New Orleans-style rhythm and blues with psychedelic rock and elaborate stage shows that bordered on voodoo religious ceremonies, including elaborate costumes and headdress (reflecting and presumably inspired by Screamin' Jay Hawkins's stage act). For a time he was billed as "Doctor John, The Night Tripper". The name "Dr. John" came from a legendary Louisiana voodoo practitioner of the early 1800s. Gris-Gris, his 1968 debut album combining voodoo rhythms and chants with the New Orleans music tradition, was highly-ranked on Rolling Stone's 500 Greatest Albums of All Time. - wikipedia 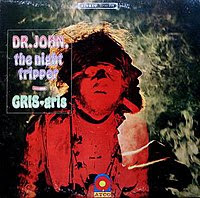 1968 - Gris Gris
Gris-Gris was released in 1968 on Atco Records, a sub-label of Atlantic Records. Atlantic exectuve Ahmet Ertegun was reluctant to release the record at first, exclaiming "How can we market this boogaloo crap?".[1] Gris-Gris failed to chart in the United States and United Kingdom. Modern reception of the album has been very positive. Richie Unterberger of Allmusic gave the album five out of five stars, referring to it as "The most exploratory and psychedelic outing of Dr. John's career".[5] In 1999, Tom Moon of  Rolling Stone gave the album a positive review, with a rating of four stars out of five. In 2003, the album was ranked number 143 on Rolling Stone magazine's list of the 500 greatest albums of all time
Track Listing:
Side one
1."Gris-Gris Gumbo Ya Ya" (Dr.John Creaux)
2."Danse Kalinda Ba Doom" (Creaux, Harold Battiste)
3."Mama Roux" (Creaux, Jessie Hill)
4."Danse Fambeaux" (Creaux)
Side two
1."Croker Courtbullion" (Battiste)
2."Jump Sturdy" (Creaux)
3."I Walk On Gilded Splinters" (Creaux)
If you have no idea who Dr. John is, I suggest you go do some homework.  This guy has been creating great music since the beginning of time.
getyousome
Posted by swampchode at 11:24 PM