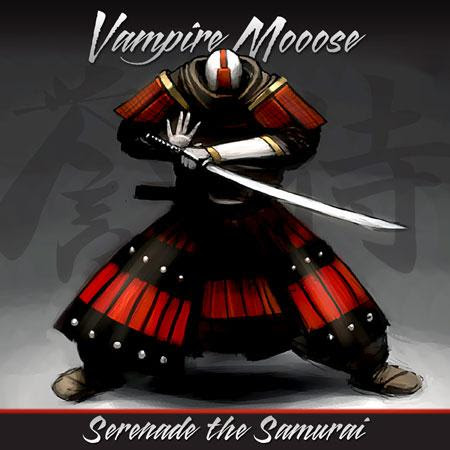 Serenade the Samurai is a study in rhythmic complexity. Even without the suggestion planted in me by a recollection of hearing them admire Meshuggah in an interview, the resemblance would be evident. But where Meshuggah gladly strays into their lonely rarefied stratum which requires from us dedicated intellectual labor if we wish to join them, Vampire Mooose gives us visceral rhythms which almost effortlessly fill our heads comfortably to their limits and take over our minds.

Of particular note is the manner in which the vocals and guitars are carefully arranged almost exclusively to enrich the rhythm. The riffs suggest another layer of rhythm that will occasionally dizzy you while the low end constantly batters you back down. The vocals, with the tone of meat being scraped off your bones, are often yanking you in yet another rhythmic direction—but always the entire composition is coherent.

As one would expect in an album such as what I’ve described so far, the drumming is stellar both in absolute terms and in its flawless suitability to the music.

The opening track Portauni accurately reflects the spirit of the music. The following two tracks are worth investigating also, as a legitimate extension of the spirit. By then you will have gotten the point and know whether you’ll like what remains—which is more of the same, except a tiny bit diluted. A few points are docked for the dilution.

This is an unusual album. It is all those crazy chugging bridge bits that are moments of zen sprinkled around on other albums, except here they are strung together with a minimum of filler in a way that succeeds by being a living monstrosity pure Chug Elemental. It is quite a spectacle and worth experiencing.