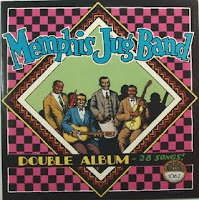 The Memphis Jug Band was an American musical group in the late 1920s and early to mid 1930s. The band featured harmonicas, violins, mandolins, banjos, and guitars, backed by washboards, kazoo, and jugs blown to supply the bass; they played in a variety of musical styles. The band recorded almost a hundred titles.
Between 1927 and 1934 various African-American musicians in the Memphis, Tennessee area grouped around singer, songwriter, guitarist, and harmonica player Will Shade (also known as Son Brimmer or Sun Brimmer). The personnel of this jug band varied from day to day, with Shade booking gigs and arranging recording sessions. The band functioned as a training ground for musicians who would go on to success with careers of their own. (Wikepedia)

I was having such a fun time listening to this great cd that i thought i had to share. I'd like to hear some early Louisiana Jug/Blues bands from the 20's-30's, if there were any. This is timeless music and i'm glad these recordings sound so good. Check 'em out!