Bobby Previte - 2006 - The Coalition of the Willing 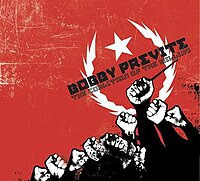 The Coalition of the Willing is the 2006 album by drummer Bobby Previte. It combines elements of both jazz and classic rock. Featured artists include Charlie Hunter on guitar, Steve Bernstein on trumpet, Jamie Saft on the Hammond organ and Skerik on saxophone. Although Hunter is mostly known for his unique eight-string guitar work, he uses a regular six-string guitar on the album. Previte toured Europe and North America in support of the album.

The Coalition of the Willing is an instrumental jazz and rock "all-star" ensemble led by Bobby Previte.  Live performances are improvisational emphasizing groove, experimental and cross-genres. The self-titled album was released 2006 (Ropeadope) and the tour began in early 2006. The West Coast touring band has remained active through July 2007.

This album is GREAT.  If you checked out my posts of Garage a Trois, you should love this.

BUY
Posted by swampchode at 6:26 PM