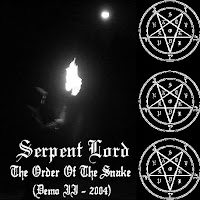 This demo sounds every bit as good as most full lengths so don't let that scare you off. It's a one man side project from the vocalist and guitar player of the symphonic black metal band, Ceremonial Castings. This, however, isn't a symphonic album. It's a very enjoyable, evil and glorious album.

Warcult of One
Posted by Lord Kur at 2:13 PM